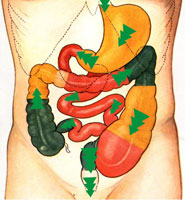 According to Ayurveda, the food should be ingested considering – Prakriti, karana, samyoga, raashi, desha, kaala, upayogasamsthaa and upayoktaa. The directions of eating as stated by Caraka are:

If the above stated factors are not considered while taking food, the food may not do good to health because the quality of food varies according to the above which alter their actions in the body. The same food may be healthful for someone whereas it may degrade the health in other.