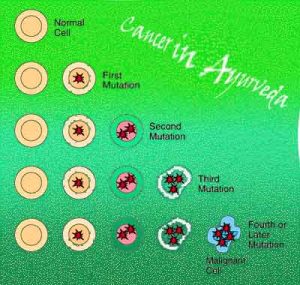 Ayurveda should be redefined in many problems due to its conventional standard treatments. Likewise in cancer, although the cancer is not mentioned in the great triads “Brihat Trayi”, in ancient time it was referred as orphan illness. Orphan illness refers to that disease which was not studied well in terms of its etio-pathology, therapeutics and prognosis. But now ayurveda too has to develop an oncology – both theoretical and applied.

It is obvious that no one can honestly claim to know the cure for cancer. Many of the questions related to etiopathology of cancer remain unanswered.

As we know cell is the basic structural unit of the human body. It may be rationally presumed that there was some knowledge of the cell boundary and molecular traffic between the extra cellular and intracellular fluids even before the advent of electron microscope. Human body is composed of between 50-100 trillion cells. Charaka says

It essentially means that the basic body components are structurally atomic, innumerable and microscopic.

Each cell has unique characteristics (either inherited or acquired) to perform certain subset of functions. Integrity of human system is maintained by the synchronization of functions of sub-systems, which are organically interconnected and biologically regulated by the tridoshas, biophysico chemical energies of the body. Of the three forms of energies, vayu acts as the master force. Pitta is responsible for all processess involving enzyme synthesis needed to bring about transformation and Kapha, being responsible for storage can be identified with the cell membrane and cell wall, basic reserves for the cell to call upon in hard times.

Cancer is a disorder of cellular behaviour, in which the structural/functional integrity is distorted.

We come across descriptions of disease entities in ancient ayurvedic texts that have remarkable similarities with modern interpretations of cancer. However, one can hardly find a single comprehensive word inayurveda denoting a disease entity, which is fully comparable with concept of cancer.

Etymologically the word ‘Arbuda’ represents an enormously growing mass encroaching and destroying the normal structural and functional status of an organ and on a larger scale the entire human body.

On conducting a literature survey, we get a fairly good amount of information with regard to the understanding and interpretations of our predecessors about cancer. In this context, appropriate reference has to be made to a variety of diseases which have this particular feature in onset, growth spread or manifestation. It includes granthi, apachi, gulma, udara, vidhradi and dustavrana. Benign forms of these diseases are likely to become malignant over a period of time where the standard treatments prove ineffective. We may say that sannipathika stage of dosha vitiation of diseases is comparable with malignant conditions.

One of the criteria adopted by the exponents of ayurveda in naming and grouping of diseases was their commonalities in ethiopathogenesis, disease processes, clinical manifestations and terminal stages of the diseases. The following descriptions with its appropriate interpretations provide a sound basis for development of ayurvedic oncology.